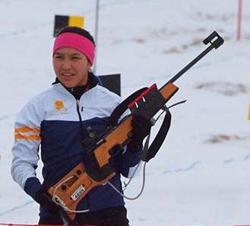 The word biathlon is Greek in origin, meaning “two contests” for competitors.

The Snowshoe Biathlon races are the same as Ski Biathlon except that the distances are shorter and the penalty lap is shorter.

Snowshoe biathlon became part of the Arctic Winter Games in 1978 because of the traditions of hunting and trapping as a valued part of the northern lifestyle and the sport remains popular among northern people.

A team consists of up to eight athletes and two coaches from each participating contingent.

Note: Sports venues and location are subject to change

Interested athletes can apply for the 2020 Biathlon Snowshoe Team by reading the documents below.